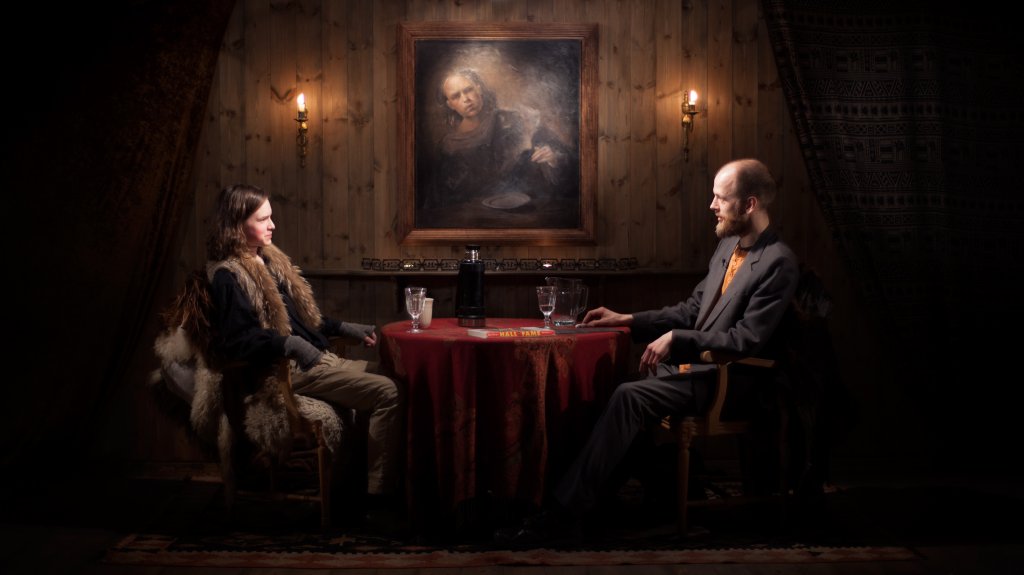 We cling nervously to the melody, but we don’t handle it freely, we don’t really make anything new out of it, we merely overload it.

Aristotle, the main philosophical influence of the Renaissance, wrote in Poetics that “Comedy aims at representing men as worse, Tragedy as better than in actual life.”
In present time, there is a revival of the Aristotelian mindset within painting thanks to the growth of Odd Nerdrum’s kitsch philosophy. The value system builds on the skills of storytelling, craftsmanship, and pathos.
The young, extraordinarily talented painter William Heimdal is a student of the kitsch philosophy. In The Cave of Apelles, Heimdal shares highlights from his “long career” and talks about how to create a good story. – A good story is when a good person experiences a tragedy, he says.

Being 16 years old, Heimdal has reached an astonishingly high level from a young age. Yet, he emphatically denies that he has pre-born capabilities – commonly known as “natural talent.”

– There is no such thing as natural talent, he says, pointing out that it is an inexplicable term.

The young painter presents his solution:

– Hard work. One must work hard. 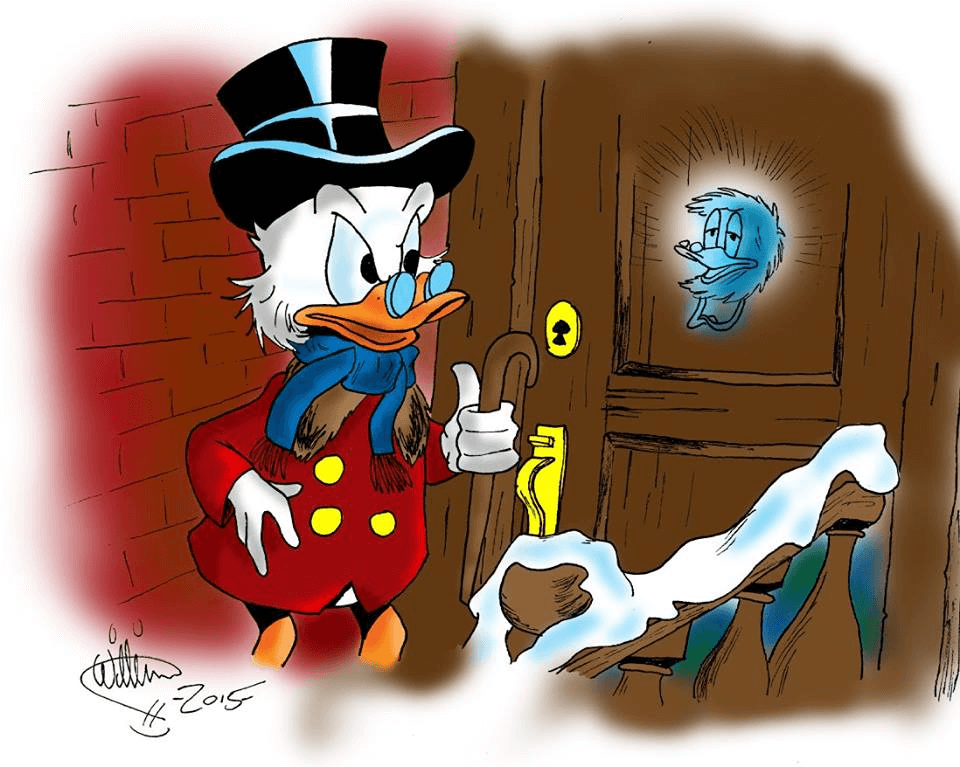 Heimdal was around seven years old when his mother introduced him to the Donald Duck cartoons. He quickly found out that the American cartoonist Don Rosa stood out regarding the quality of the craftsmanship and storytelling.

He started copying Don Rosa and drawing his own Donald Duck cartoons, one of which he sent into Egmont, the Scandinavian publisher of the Donald Duck magazines, for an annual competition.

– At first, I was accepted together with another person, Mikkel Hagen. He was somewhat older than me and became my mentor, says Heimdal and continues: 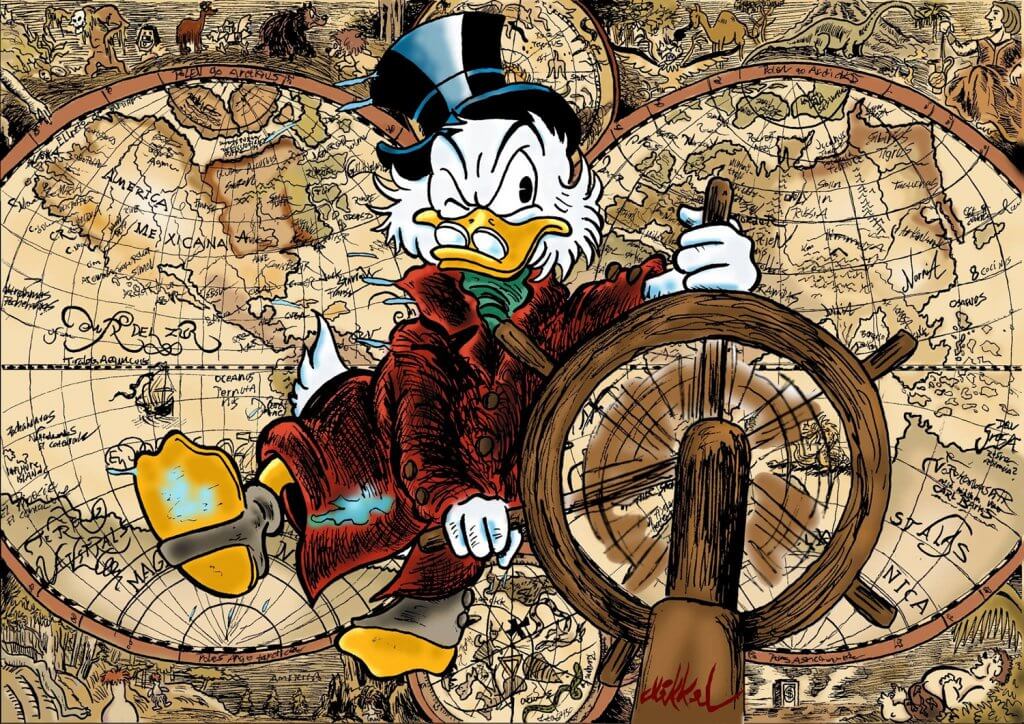 – Next year, none of us were accepted. What is even worse is that the winners were so badly made. Horrible. Drawing ducks became meaningless because there was no hope for the talent – not even in Donald Duck.

Heimdal was then introduced to J.R.R. Tolkien’s books The Hobbit and The Lord of the Rings. In particular, he was drawn to the illustrations by Alan Lee and John Howe.

– You can call this my first introduction to kitsch, says Heimdal.

– So when did you get into painting? asks Jan-Ove Tuv.

– I was 13 years old. My mother showed me this painting class that lasted for a weekend. I was not sure, because I still thought that illustrating Lord of the Rings was the way to go, says Heimdal.

The painting weekend class was led by Monika Helgesen, a former student of Odd Nerdrum. She advised young Heimdal to take a look at her mentor’s works.

– The first work by Nerdrum I saw was “Twilight” and I was stunned that he managed to make a shitting woman beautiful, says Heimdal and continues:

– I bought more painting material and started copying Rembrandt. Then, I made my first self-portrait.

In a short period of time, Heimdal’s journey had gone from a Donald Duck cartoonist to a painter. He was soon to be introduced to the kitsch philosophy. 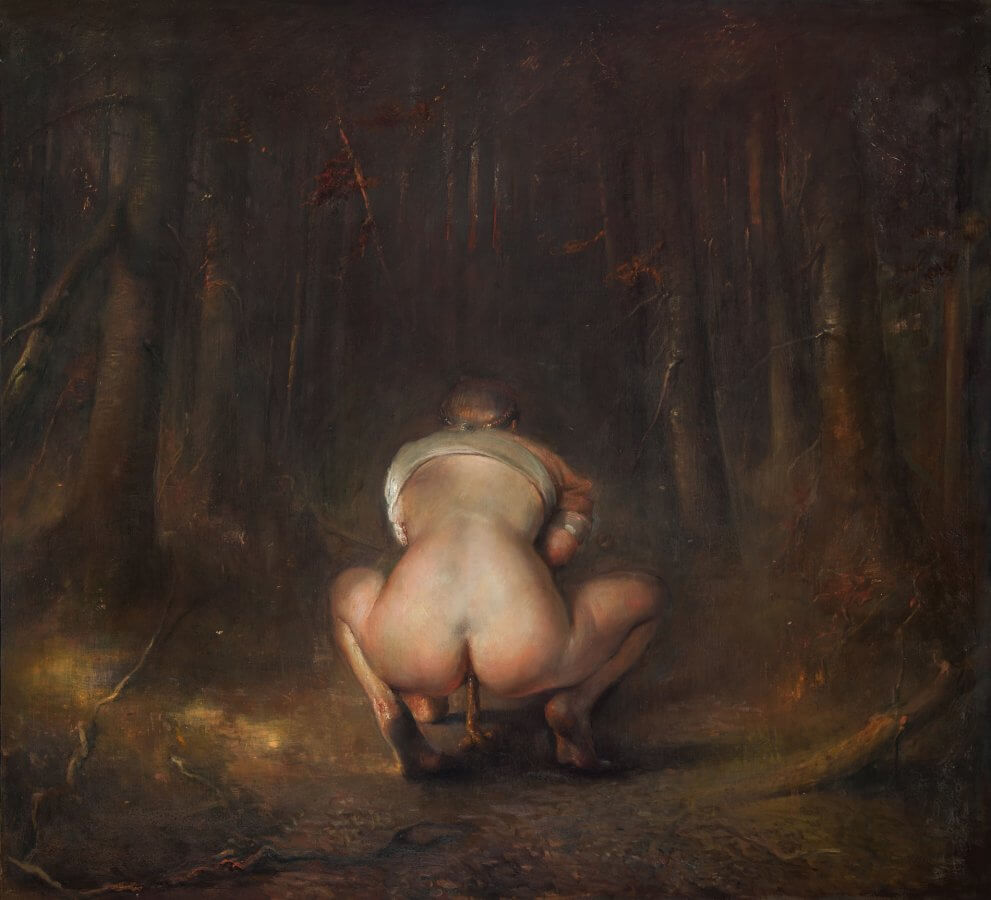 – Do not call me an artist!

Thanks to Monika Helgesen, Heimdal discovered the kitsch philosophy.

– I remember being somewhat confused in my value system. I didn’t really philosophize about painting. What I knew, I knew unconsciously, he says and elaborates on his discovery of the kitsch philosophy.

– Before I ever read Aristotle, I took the test Are You a Kitsch-person or an Artist? I got two “Kantian” answers, and was really upset. The first thing I did was to buy Aristotle’s Poetics and read that.

The kitsch tradition is where he belongs, Heimdal says. He explains how he, ever since he started painting, was clear that he wanted to become a painter. He has never considered himself an artist, not even when he made Duck cartoons.

– Do not call me an artist! An artist is like the old Picasso. I am completely different than those people. My concern is with making great stories and great paintings – not being part of the group. I have always been an outcast. 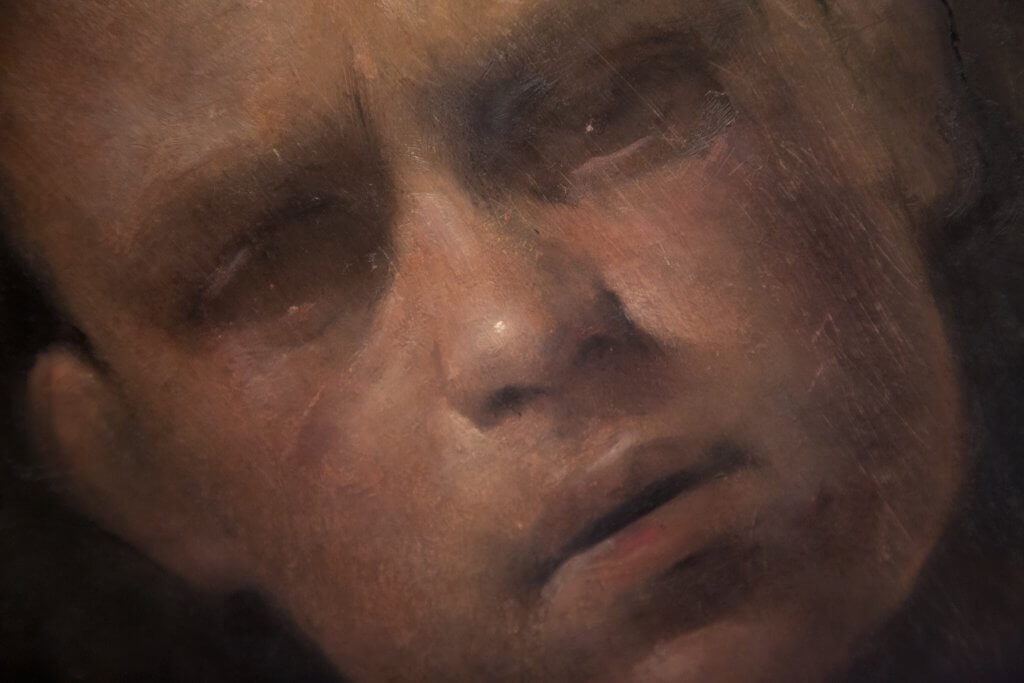 Detail of Heimdal’s face in “Self-portrait as a Poet” Photo: Cave of Apelles

The centerpiece in the studio is Heimdal’s Self-portrait as a Poet. The young painter explains in what way his self-portrait tells a story.

– I have tried to make the man to look like man as he should be, like a good person. He also looks like a dog. No food on the plate. Therefore, I have to give away my last golden coin.

Heimdal’s goal is to get empathy from the viewer. 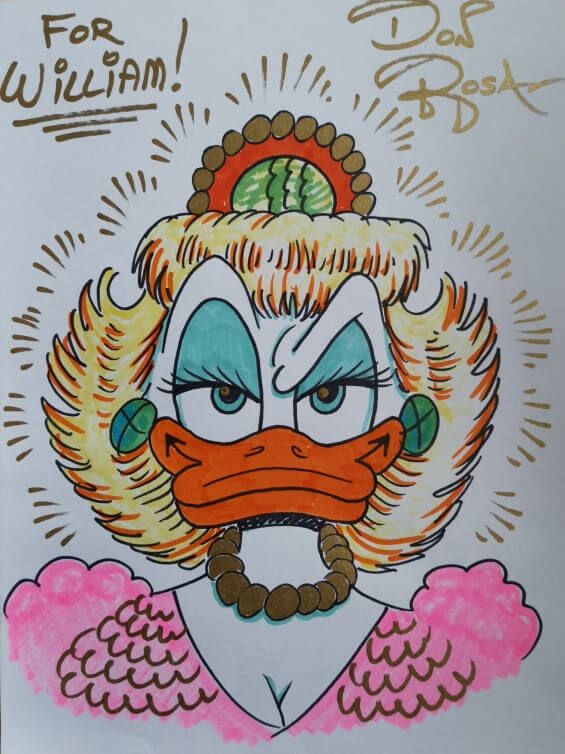 – The viewer wants him to be elevated. You want to help this man, Heimdal says.

The conversation between Jan-Ove Tuv and William Heimdal regularly comes back to the influence of Don Rosa. Heimdal mentions the Rosa story The Quest for Kalevala, where Scrooge McDuck & Co participates in a Finnish mythical story, including a giant frog that flies into the air.

– Aristotle talks about this, says Heimdal and elaborates:

– You can paint something that is impossible in so-called real life, but as long as it is well done it is all right.

Heimdal points out that Don Rosa tells timeless stories because he bases his stories on myths. The Rosa story The Life and Times of Scrooge McDuck, for instance, is “the hero’s journey.”

Don Rosa has explained that he is most pleased with stories where the plot goes over a period of time of one day, Tuv points out. Also this relates to Aristotle, who says that the epic tale can continue forever, while the tragedy should end before sunset. 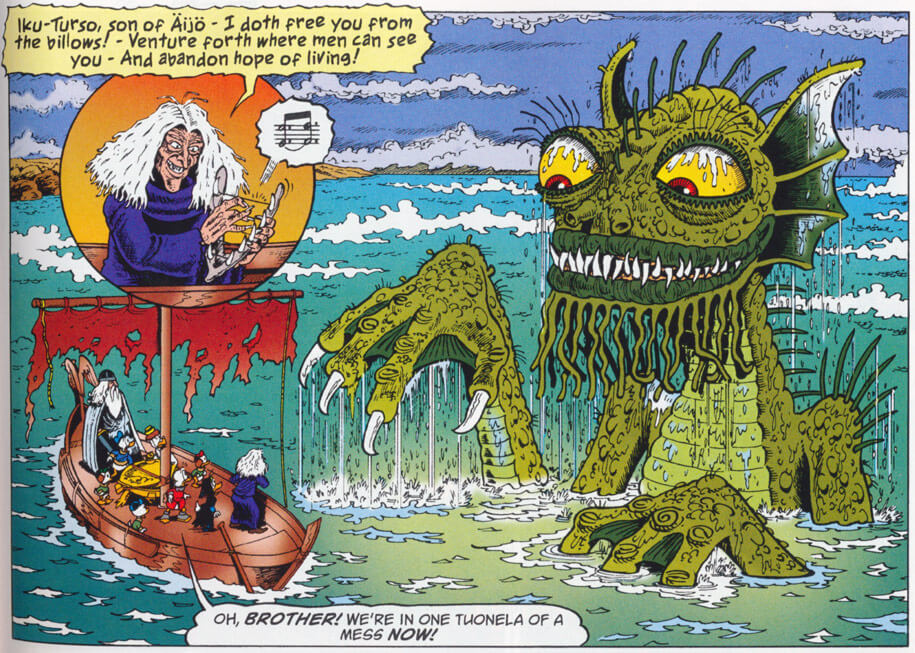 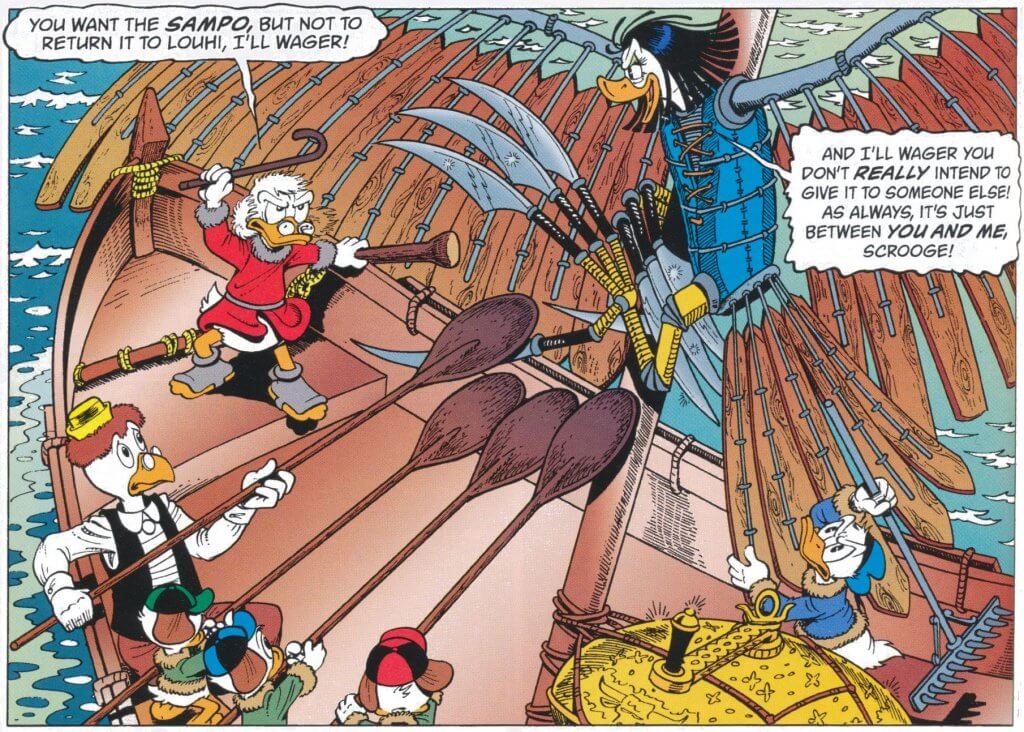 One of Heimdal’s recent paintings is of the main character in Dostoevsky’s novel Crime and Punishment, depicting the chased Raskolnikov shortly after he has committed murder.

– One should in a way see oneself in that painting. People tend to sympathize with good people. This person is good, but he has done something horrible. Think about how you treat people. One can become as desperate as this man.

Ayn Rand has taught Heimdal that a good piece of kitsch is supposed to give the viewer a moral option. 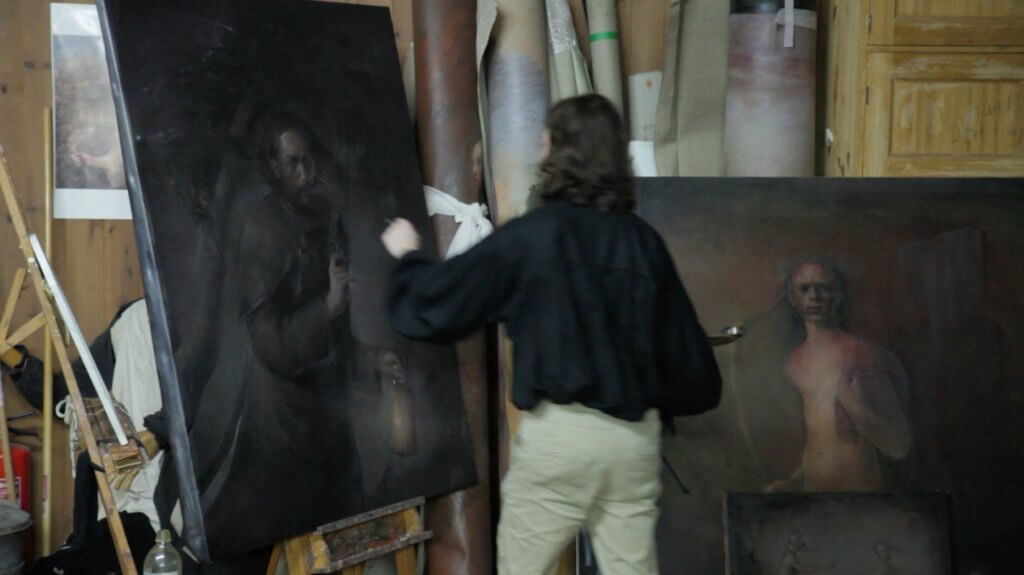 William Heimdal working on his Raskolnikov portrait. Still photo, From Another Land (2019)

– A good example is Ivan the Terrible by Ilya Repin. One sees this man who has killed his son and his facial expression leaves one in shock. Unconsciously, one will think “Maybe I will become this man. Maybe I should think about how I treat my son. Am I good enough?”

Heimdal describes how painting can make the entire society better:

– If people could look at for example the Raskolnikov painting and have a relationship to it as people – as a story – and not see it as only paint on a canvas, they would be able to

When one person does that, he will become a better man. If many people do it, the entire society will become better. Always start with yourself.

– Metaphorically speaking, one sets up a set of goals on how to become a better person. That is why painting is important, Heimdal declares. 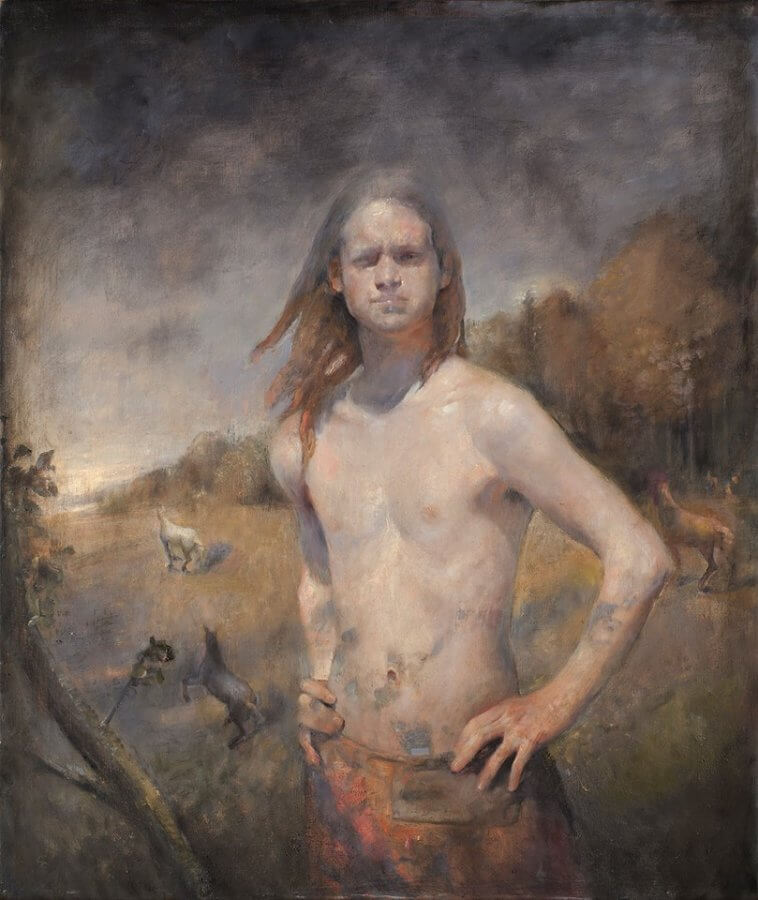 Jan-Ove Tuv plays the role of the Devil’s advocate and asks: – Is not Odd Nerdrum original? You need to be original in order to become a master!

– One can compare it to trees. If one has one seed and plant it here. Then, one goes five meters in one direction, and plants one there. The seeds are identical, having the same structure. Then, wait for ten years. Both will become two beautiful pine trees. They look different however – in their form. But one can clearly see that they are pine trees.

Tuv points to the Jungian psychologist and mythologist Joseph Campbell who talks about the monomyth: – The seeds grow up in different soils; one becomes Jesus, another becomes the Buddha. The local coloring is different, says Tuv.

– Also Aristotle talks about this, answers Heimdal. – It does not matter what voice a story is told in, but it has to give the same effect.

The Decline of the West

Heimdal thinks that one of the reasons why the West is going down is because of the lack of culture and religion. He describes the school system as “brainwash” and says that the students are taught to believe that humankind has progressed steadily from Stone Age to the present time. He says that his teachers skip most of the golden ages and regressive periods of history.

Also read: The Artification of Notre Dame and the Western World

– I become sad when I think about my generation. They do not think. The government decides what they should learn. And the government is mostly socialists, and they are the ones that hate kitsch the most. I have a communist teacher who says that the Christian religion is fanatism, says Heimdal. 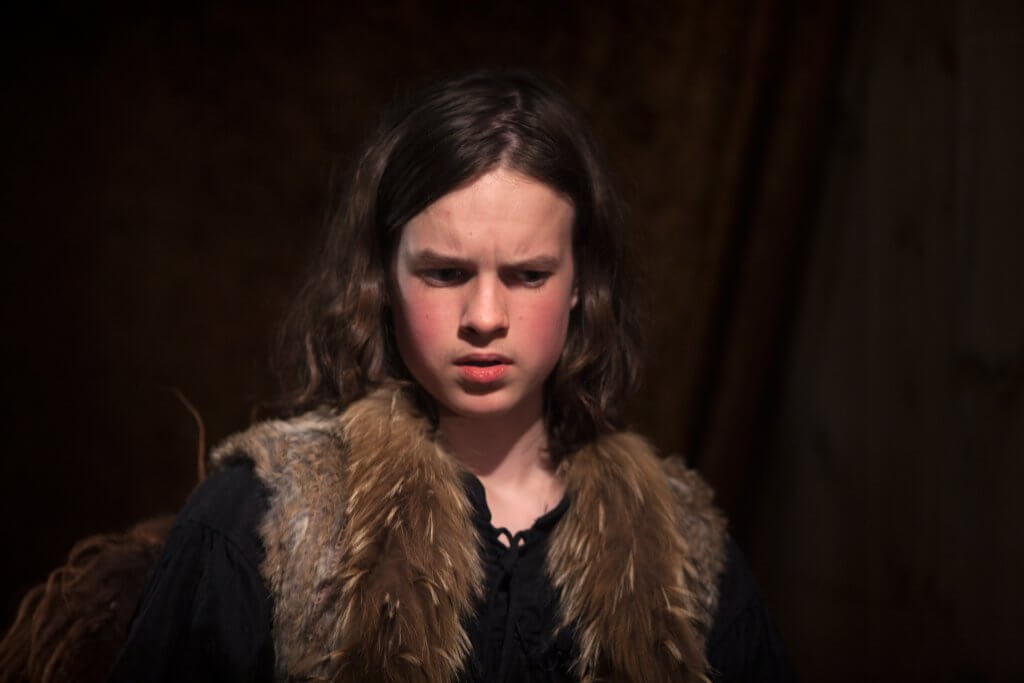 – Where do you learn, then? asks Tuv.

– I read books. When I studied with Öde Nerdrum, we discussed Aristotle and Dostoevsky, says Heimdal.

Heimdal ends with a philosophic advice to his generation:

– Think. Read books. Become wise. Do not think about a painting as a painting, but as a story. Read both sides of the situation. Then, you will suddenly realize that you have an option. Because you do not have that today with the brainwashing in schools, where Christianity is considered the devil. Also, be open to other ideas. Listen carefully to what others say.