Vermeer’s woman reading a letter is as full of latent or subliminal kitsch as Tolstoy’s War and Peace.

Skopje is currently finding itself as the indisputable “anti-cultural” capital of Europe, following the controversy of the project dubbed “Skopje 2014,” which is being financed by the Macedonian government. Classical buildings and sculptures of “dated aesthetics” are erected overnight, overhauling morning grumpy Macedonians and angry artists, who arrange for public gatherings demonstrating against “antiquization.”

Naturally, many have seen “Skopje 2014” to be a political tool, and some have gone as far as to suggest the project to be hinting at ethnic cleansing.
The most ostensive attacks includes the recurring accusation that the architecture is a result of kitsch.

Opponents charge that Skopje 2014, featuring a hodgepodge of anachronistic architectural styles, is no more than kitsch. Rather than producing a “European” image for Macedonia, critics claim that Skopje 2014, as a counterfeit, a second-rate copy of European originals, can only embarrass and marginalize the country.

– Andrew Graan,  the University of Virginia 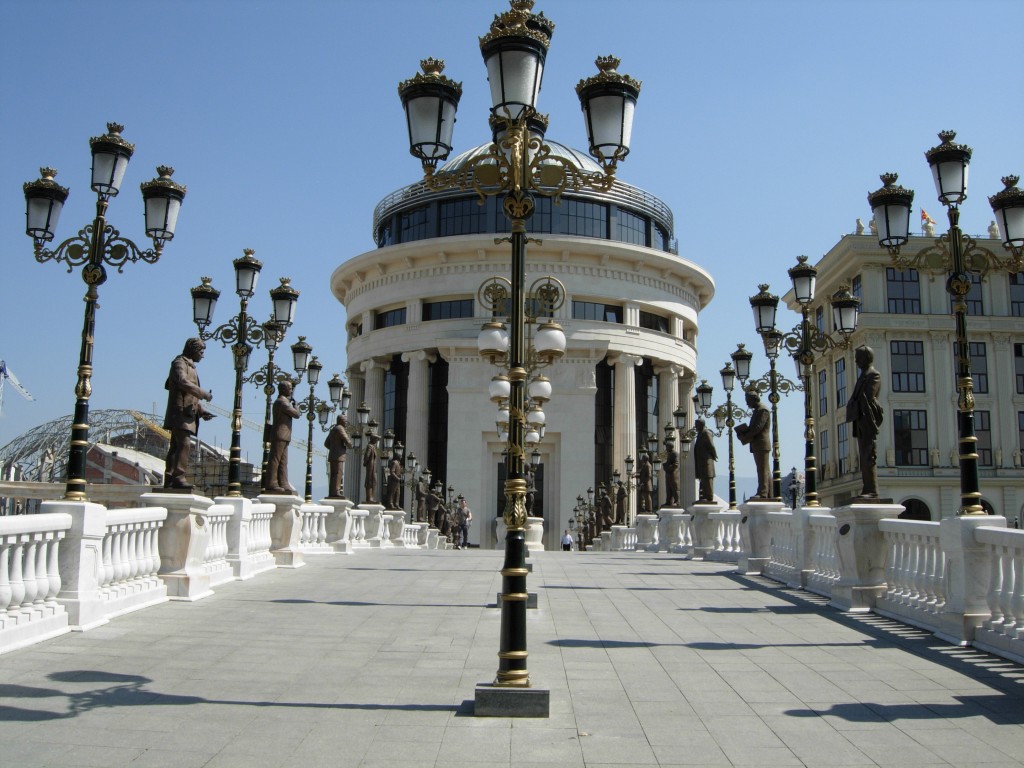 View of the new Archeological Museum of Macedonia from … The Kitsch Bridge!

The imaginative descriptions that rain over the already infamous buildings at Macedonia Square goes on and on, and the project is labeled everything from an “impressive spectacle” to an “encyclopedia of kitsch.”

200 years ago, few would even think of criticizing the city plans of Skopje. The problem is that these buildings, bridges and statues are not from the 19th century; they are contemporary creations – some of the new statues are probably cast at this very moment!

Those that are behind the architectural makeover of Skopje are kept well away from the limelight. Nonetheless, they must be confused about the critique aimed at their proud monuments around the city.

New buildings in Skopje. From the left: The new Archeological Museum of Macedonia, Unknown building?, Prosecutor’s Office and the Financial Police and The New Ministry of Foreign Affairs

Kitsch is a symbol of the chains of generations, covering the raptures between past and present.

The hatred towards “Skopje 2014,” which is a straight-through attack against classicism, proves why “kitsch” is crucial.
If one accepts kitsch as another word for classicism, one will better understand the nature of kitsch and realize why the modernists use this word to attack any new building of some grandeur, like the architecture currently built in Skopje. Instead of getting defensive, people ought to take pride in being “debased” as “kitsch.”
Unfortunately, calling someone by this name is still equal to accusing someone in the Middle Ages of dealing with the devil.
Painters and composers have been labeled as “kitsch” and consequently changed their way of working out of insecurity – but the connotation of “kitsch” could easily change. The problem is that kitsch has been demonized to an extent which is comparable with the mythological figure Lucifer (The lightbearer), and Satan perhaps more than with anyone else.

However incurable his reputation seemed, Satan managed, after all, to receive some compensation in the 1930s when Mikhail Bulgakov wrote The Master and Margarita (1940). Man’s idea of good and evil was placed on its head, and he who reigns in hell seemed all of the sudden like a reasonable guy.
In a similar way, Richard Strauss, and later more extensively, Odd Nerdrum, disarmed the critics by reappropriating ‘kitsch’. This has opened up for a nuanced understanding of a term which has suffered thoroughly from its early beginnings in the mid 1800s.

Opening scene from The Master and Margarita (TV Mini-series from 2005) directed by Vladimir Bortko. The film is an adaption of Michail Bulgakov’s book with the same title.

‘Skopje 2014’ is not alone; many monumental structures have been criticized as “kitsch.” The New Swanstone Castle in Hohenschwangau (Germany) has been called a “king of kitsch” and the Victor Emanuel II Monument in Rome has been accused of being kitsch “masquerading as classical architecture.”

A classical city under construction in England called Poundbury is experiencing the same hatred – most notable is the attacks made against their new Fire Station (2009). The word is that the man behind project “Poundbury”, Prince Charles of England, has a “weakness for pretentious kitsch.”

Whether you agree or not with the appropriation of the term “kitsch,” the fact still remains that classical buildings, paintings, sculptures and music are labeled with the expression, and as a result their value is debased.

What could be a better weapon against such labelling than self-irony?

Though Architecture can be kitschy, might there be a better word for it (a more technical one) that could easily be explained to an architect? “Kitsch” is after all, generally understood to be more in touch with a motif (a loving couple, a dramatic scene, an old man e.t.c.)
I find it so difficult to discuss architecture with people, certain people are of the “opinion” that the opera in Oslo is “beautiful” for example. “Beauty” … that word is difficult.

When everyone agrees however, that the purpose of building something is an objective pursuit for it to be both outstanding and fitting with the rest of the town (as opposed to modernism’s “artist expression”), then maybe there will be communication and a kind of objective agreement.