Öde Nerdrum to Cave of Apelles: – Beauty is not enough!
By Bork S. Nerdrum 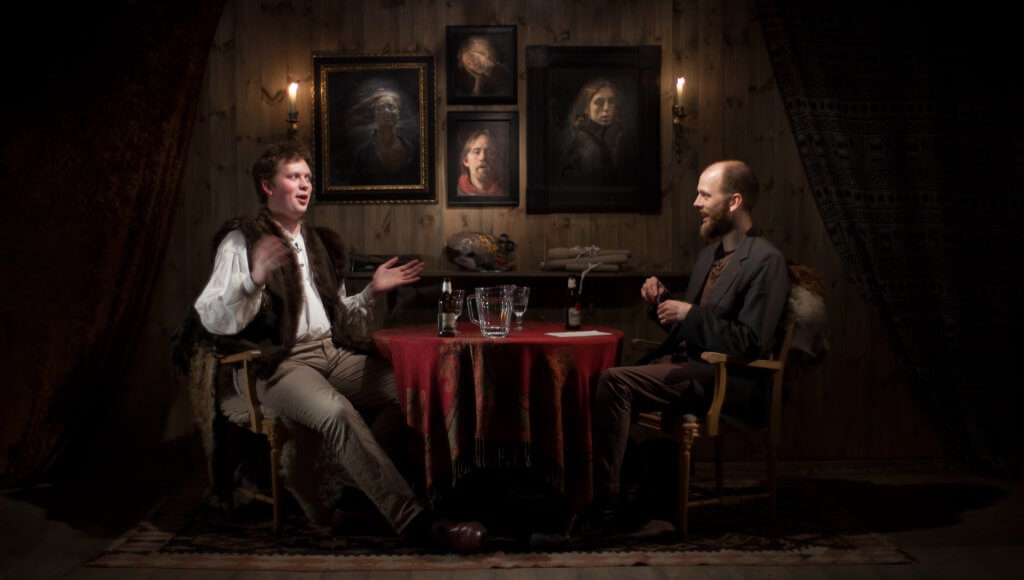 Facing the kitsch aesthetic is the unfathomable world of myths.

We need your support. Donations are tremendously important for the continuation of this show. Make a donation to Cave of Apelles for more quality conversations.

Continuing the Renaissance workshop tradition, Öde Nerdrum paints alongside his father at the Nerdrum Studio in Norway and Sweden. With his mother, Turid Spildo, he reviews applications from people who come to study with Odd Nerdrum from all around the world.I am not a child prodigy or anything. I think I was eighteen when I first took up a brush, and that was not because of any arty clichè, that I had to ‘express myself’ or ‘I’ve drawn as far as I can remember’. I hate that line, it comes in every application. I just thought quite rationally that it would be quite stupid if none of the children of Mr. Nerdrum would learn how to paint from him. So that’s why I did it.
— Öde Nerdrum

At the Nerdrum Studio, a student’s first task is to paint a self-portrait. Öde Nerdrum says that the advantage of making self-portraits is that you become aware of proportional mistakes and peculiarities in your own face. Conscious of these errors, you can avoid them with more ease when you paint faces of other people.
He recounts that there had been a struggling student who looked like the Renaissance painter El Greco. To put an end to his frustration, Odd Nerdrum had simply told him “just paint like El Greco, you look like him anyways.”

The host, Jan-Ove Tuv, points out the practicality of having a live, free model, right in front of you. As a former student of Nerdrum himself, he recalls him talking about the benefit of placing oneself in different roles, testing out different characters and psychologies.
Öde Nerdrum adds that “people have a tendency to become very serious when they paint self-portraits, and actually quite grumpy, so you have to put yourself in roles, it’s very important to make it less personal. If you dig into yourself you find… just travesty.” 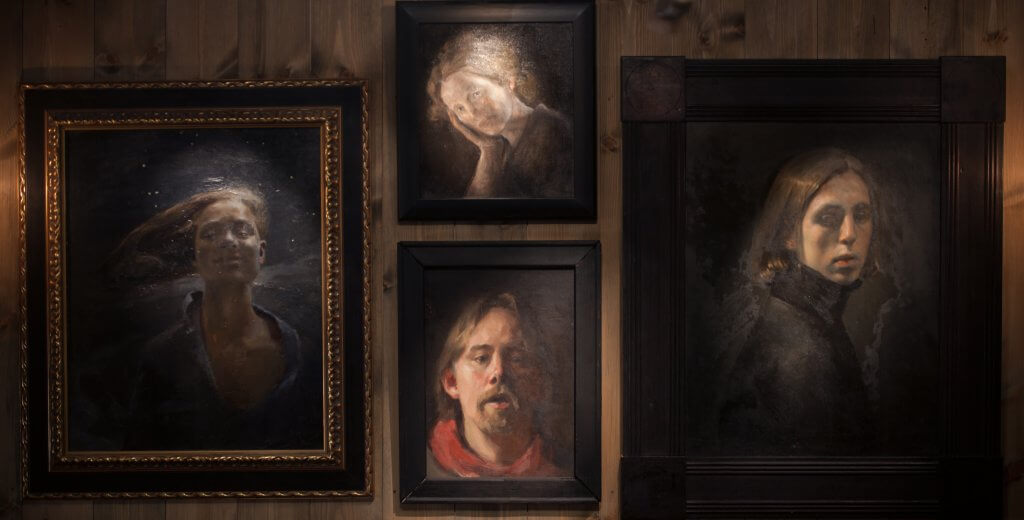 The Future for Classical Painting

Classical figurative painting finds itself in a “lousy situation” according to Nerdrum’s son. The market is, after all, ruled with an iron fist by the modernists or “depressionists” as he likes to call them. He says that he is open to alternatives that could change the current situation, but with some exceptions, however.
In 2009, the philosopher Sir Roger Scruton appeared in the BBC documentary Why Beauty Matters, based on his book on the same subject. Scruton argues for the necessity of beauty, describing beauty as an object we take pleasure in from a certain distance and with a certain disinterested interest.
Whilst Scruton operates with concepts and ideas from German Romanticism, Nerdrum and his son base their work on the Greco-Roman value system that was reinforced in the Renaissance through the Baroque, before it disappeared with the decadent Enlightenment Period.

A backlash to Scruton’s Beauty, as Öde Nerdrum sees it, is that “an abstract painting could be beautiful,” because “beautiful” is just another word for something which is “visually pleasing.” And in the end, as he says, anything can become beautiful because the term is too vague.
He compares it to the purification of the Christian church as opposed to Catholicism, arguing that Polytheistic religions often are more rich culturally, than monotheistic. With a far stretch for the sake of argument, he makes the case that the Catholic Church was sort of “polytheistic” with its focus on saints and evangelists. “Then Lutheranism comes,” he says, “it’s one God and he is Good. That’s it. That’s beauty. It is something that is aesthetically pleasing. And then you have people arguing ‘is beauty subjective or is beauty objective’, and it’s a completely ridiculous conversation. The real question we should ask is ‘is beauty enough?’” 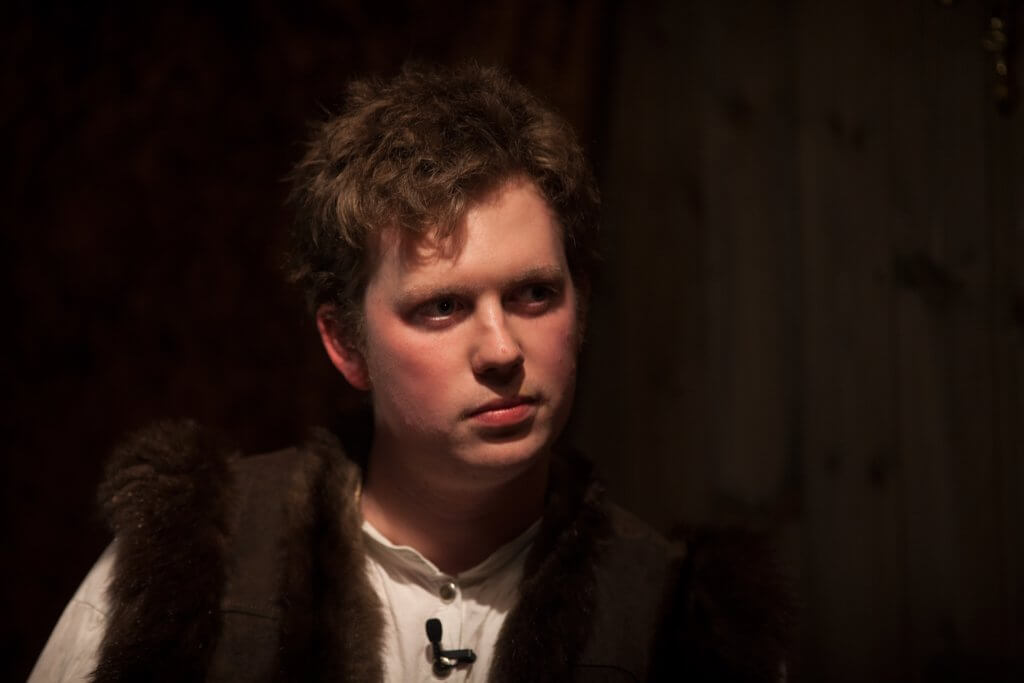 Öde Nerdrum believes in the combination of the ugly and the beautiful.

The concept of Beauty originates in the 18th century. Immanuel Kant’s philosophy on the subject birthed the Romantic era in painting, which is characteristic for its focus on landscapes and the passivity of the human figure, overwhelmed by the forces of nature.
At the time, the contemplative beauty of the landscape replaced theatrical drama in painting and sculpture.
Öde Nerdrum speculates that the term came out of the need to find a non-religious word for something all-embracingly good. To him, the concept in and of itself is problematic, primarily in light of storytelling.

It’s not beauty and it’s not ugly that makes a piece great, it’s the combination. Why would you watch a movie where everything is beautiful? You see a boy running out of a cab and he is so happy, and then two hours later he is still happy, he is fishing now. Why would you do that? So the point is not to make beautiful things or ugly things, the point is the combination. A beautiful boy who experiences ugly things.
— Öde Nerdrum

Wants to Focus on the Collectors

In view of the solution for classical figuration, Öde Nerdrum recognizes his father’s re-appropriation of Kitsch as one of the alternatives. Another proposition from Odd Nerdrum is the suggestion of dividing art history education in the universities into two rivers, respectively based on the polar opposite aesthetic philosophies of Kant and Aristotle.
“And that is one of the attempts to reform art,” says Öde Nerdrum, “because then you go into Art’s domain, because they get their education in the university, and you try to reform it. The major part of philosophy of Art today, is 18th century German Idealism, as you know, and with Kant in the center. And Kant is a firm believer in Beauty.”
Öde Nerdrum is also sceptical to the idea of reforming the university and he prefers to focus on the collectors. He finds it highly problematic that most collectors today have an art history educated person as their advisor. He juxtaposes our time with the not-so-distant past.
“Tretyakov, in Russia, he was a very smart man because he got Ilya Repin as an advisor,” he says, and uses another example from Norway, where a man named Jens Thiis had studied with Edvard Munch at the academy, but gave up painting and later became the director of the National Museum. Arguably, he bought all the best Munch-paintings available on the market because he had a love for painting, Öde Nerdrum argues.

His message to the collectors is clear:

“Choose a painter as an advisor, and apart from that, buy what you want, because the painter can see whether it is of high quality or not, like formal things, or whether it is actually good painting. And that is the best assurance that it will still be of value in 200-400 years. It is actually the only thing we can hold on to: is it well painted?”

– We need profit, not prophets

Returning to other aspects of the current situation, Jan-Ove Tuv highlights the commonality among painters of blaming popular culture and capitalism for all their problems. “What is your reaction to that?” He asks his guest.
Öde Nerdrum answers that “under Calvinism in Holland, the churches did not commission paintings anymore. You could make the case,” he says, “that Capitalism saved painting in Amsterdam. Because Amsterdam was a trading city.”

He notes that despite being unknown for two centuries after his death, two-thirds of Rembrandt’s production was preserved by someone. The important question to ask, in his view, is “who took care of Rembrandt, who took care of George de la Tour?”
He points out that much of Rembrandt’s work lived on in the collections of eccentric German noblemen who labeled the Dutchman’s work with titles that are still used to this day. The real name of Rembrandt’s grand painting “The Night Watch” would probably be “The Amsterdam Militia,” Öde Nerdrum says and continues: “But after all, I’m quite an optimist, also in this era, because two-thirds of George la Tour’s paintings were preserved by someone. Just like the Medici saw that Brunelleschi was a talented man, even though he was outside the guild. There are and there have been and there will be some people who see, and they will save the world.”
“So we need profit, not prophets?” Jan-Ove Tuv concludes.
Öde Nerdrum nods and bursts into laughter. “Yes, that’s right!”