– If you cannot breathe a soul into the figures in your paintings, you will burn in hell
By Carl W. Korsnes 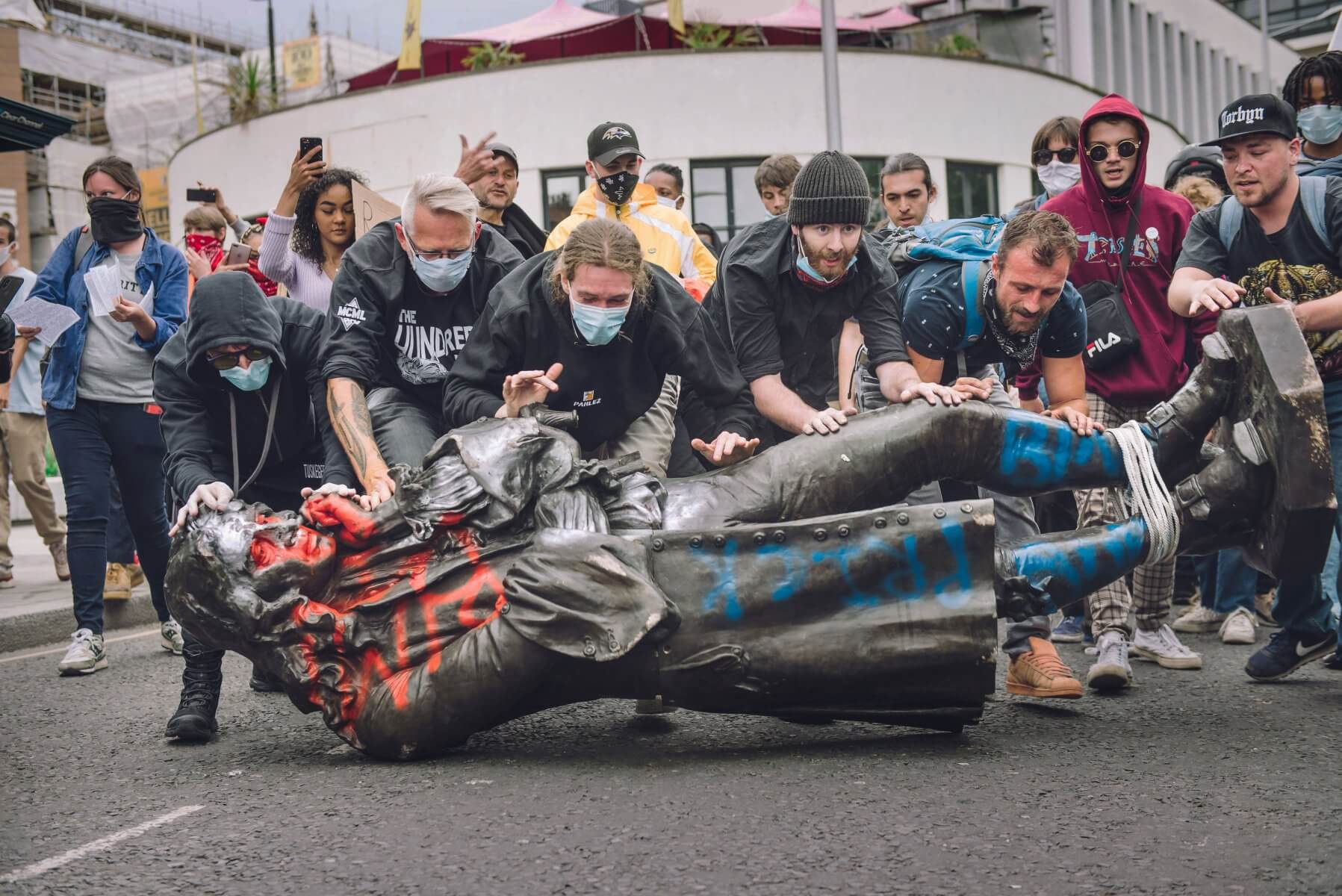 A real Rembrandt hung in a millionaire’s home elevator would undoubtedly make for kitsch.

A rampant iconoclasm is ravaging the West in a just fight against racism and slavery, but what is it all really about? This is how Jan-Ove Tuv opens the twentieth episode of The Cave of Apelles, featuring Cemal Knudsen Yucel.

Yucel is the founder of Ex-Muslims of Norway, and joins Tuv to discuss his apostasy, the current iconoclasm of the left, and the effect of islamic picture ban on Western culture.

To introduce the first topic of the conversation, Tuv points to the centerpiece — a picture of a mob toppling a statue of the merchant Edward Colston, a sculpture made by John Cassidy. The picture is from June 2020, but could easily have been from another time. Cancel culture is nothing new.

– Looking at history, has not cancel culture and toppling of statues always been precursors of mass murder and ideological coup d’etats?, asks Tuv and continues:

– The important question is, what are classical western values, and can culture survive without them? Some fear the influence of islam, but what if the real problem is western culture in its modern tapping?

Yucel is a defender of the classical western values, which he describes as a motivation for leaving islam and moving to the West. He shares his story.

The Importance of Critical Voices

In his youth, Yucel became an islamist after having grown up in a conservative sunni muslim family in Turkey. He says he was indoctrinated with islamic fundamental teachings and hate towards the West, jews, homosexuals, and non-believers.

– I support critical voices against islam or any religion or any dogmas. And freedom of speech I support all the time.

According to Yucel, what muslims are doing and what islam is saying can be different throughout history because muslims are individuals. In order to find out what islam is really about, Yucel studied the texts — the hadith books, the quran and islamic history.

– I realized that the so-called “extreme” interpretation of islam is the real islam, he says.

– There are some principles prevailing throughout time?

– Yes, muslims have many times in history become moderates, but some islamists always take everything back to the roots. And it has happened even in the last hundred years. If you look at pictures from Afghanistan and even Saudi Arabia from the early 1900s, you can see that the women are free, Yucel says, pointing out the evident contrast to the current situation for women in those countries. 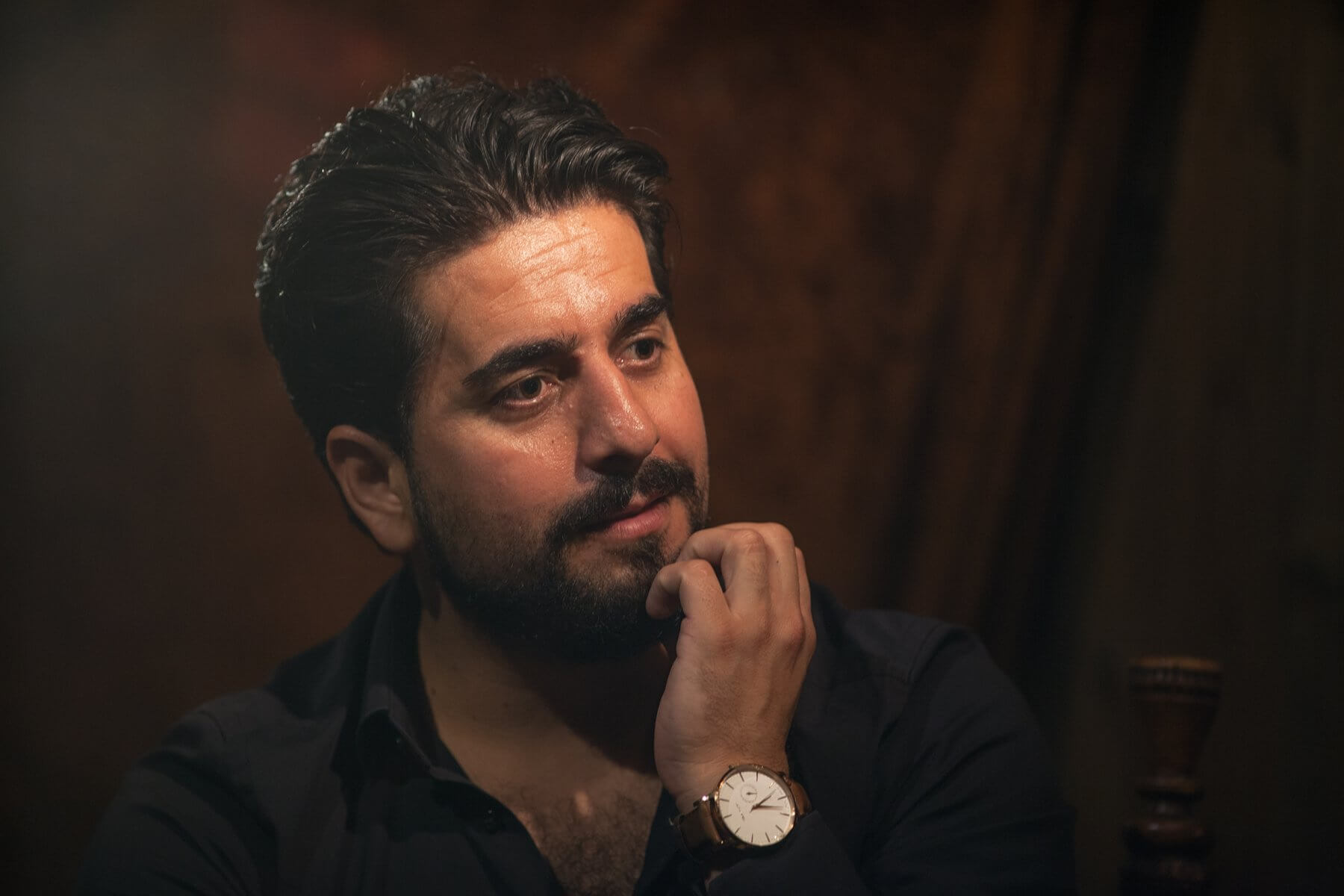 Cemal Knudsen Yucel talked about his apostasy, leftist iconoclasm and islamic picture ban at The Cave of Apelles.

The Left in the West

As an atheist in Turkey, Yucel became what he calls a  “Middle Eastern leftist” because the socialist movement opposed the islamisation of Turkey.

But after moving to the West, things were turned on their head.

– When I came to Norway, I could never find myself with the left wing because they are opposite. For me, they are far right. They are for the islamisation of the West, and they are for taking your right to speak, he says.

According to Yucel, the Left acts as a defendant of Western values (such as freedom), while they are in fact censoring everything and everyone they disagree with.
He points out how freedom of speech has been limited on social media, using the example of Trump Junior’s deleted tweet of a video where frontline doctors are talking about Covid-19.

– I think it’s called the Overton window — what you’re allowed to say — the span is getting increasingly smaller, says Tuv.

– Yes, and then there is the similarity with the islamic intolerance. We have no-platforming today. Social media is banning people who are critical against islam, or critical against climate change, says Yucel.

– When you think about who you’re not allowed to criticize, then you know who rules you.

Beeldenstorm (1566) by Jan Luyken. Owned by the Rijksmuseum in Amsterdam.

Yucel sees a regressive movement in the West — of which the toppling of statues is an observable sign.

– Why are they demolishing the statues in the West today? They say it is because of slavery, that these people had some connections with slavery, either they owned it [slaves] or they supported slavery – and they are talking about racism. But why only them?, Yucel asks rhetorically before he continues:

– I don’t believe their honesty. Because, if they are honest, let’s burn every church, every synagogue, and every mosque. Let’s burn every holy book of the abrahamic religions.

He problematizes that no one talks about the islamic slave trade, which he says has lasted for 1400 years.

– Even in Mauritania today, more than 20 percent of black people are enslaved. And I’m not talking about “modern slavery,” I’m talking about selling, buying, and inheriting slaves. Nobody’s talking about it! What is that?

– What do you think about these justifications of what they are doing when they are toppling these statues of the big Western names?, asks Tuv.

– I think it’s just double morale. […] I say, okay, if you want to demolish everything about slavery, let’s start with the pyramids, Yucel says and adds:

According to Yucel, the Western people have confronted their past many times:

– I learned about the transatlantic slave trade by white Westerners. They made movies about it, they wrote books, they taught it in school. They have challenged their dark past, like for example the crusades, colonialism, slavery, and nazism. They challenged it, and they did something about it. Maybe it comes from “the original sin” in Christianity… I don’t know.

He compares the Christian confrontation with the islamic approach:

– We muslims never did anything with our history. Nothing happened. We don’t care. 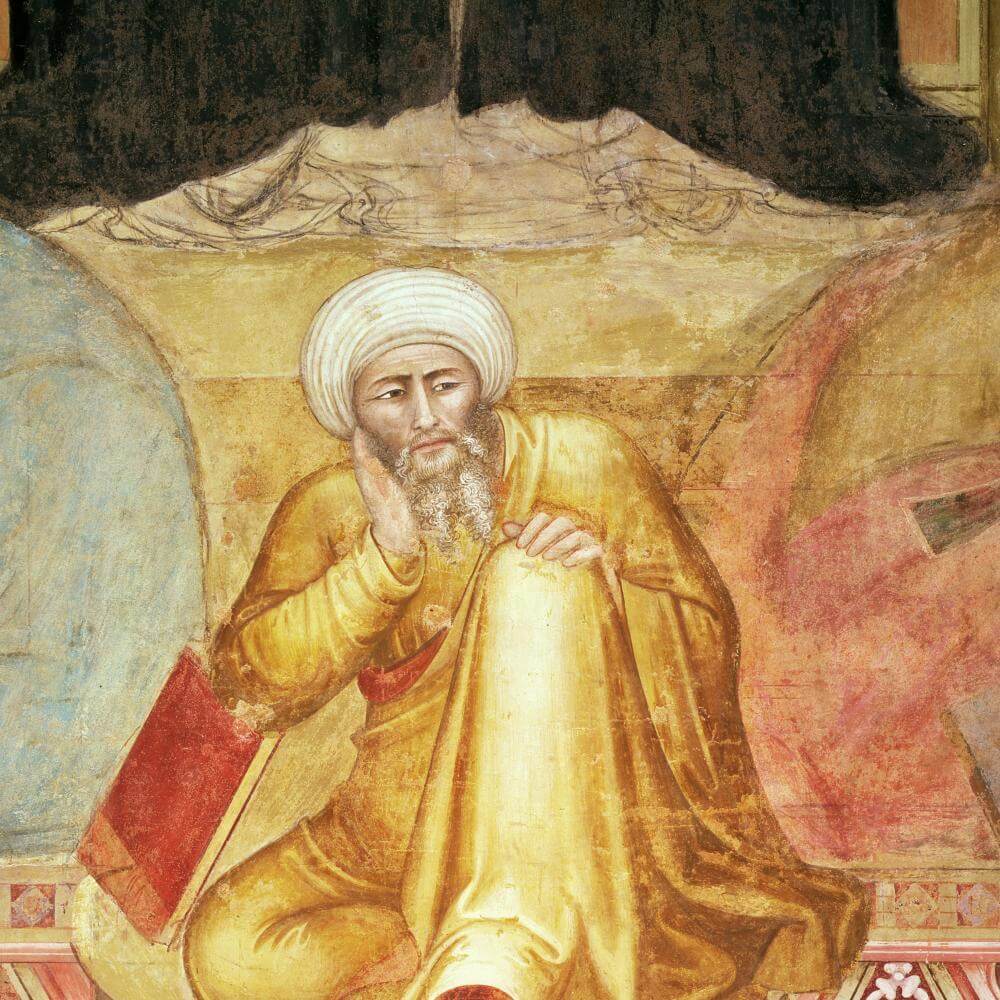 According to Cemal Knudsen Yucel, the islamic golden age is a hoax. Photo: Averroes in a 14th-century painting by Andrea di Bonaiuto.

– When Europe went into the Middle Ages and did their best to silence Greek thinking and Greek philosophy, muslims took care of it and then, because of them, we could get it back to Europe, says Tuv, curious about how Yucel considers this view, which is often taught in history books.

– It’s a hoax. The golden age of Islam is a hoax. Really! And it’s invented by orientalists in the West, Yucel replies.

When Islam expanded, it crossed with Greek, Persian, Indian, and Egpytian culture and philosophy.

– And then, of course, some people, some philosophers in the muslim countries, wrote some books. But what happened to them?

He claims that the great minds from the time of the so-called “golden age”, such as Avicenna, Averroës, Al-Farabi, or Al-Kindi were probably not even muslim.

– For instance, the books of Averroës: burned in Cordoba — in his time. And Avicenna, scientist and philosopher, he had been called a heretic by Al-Ghazali, one of the biggest philosphers of islam, whom muslims are respecting even today. Al-Kindi was executed by the caliphate because of heresy and blasphemy, Yucel says and adds:

– Almost all of them were not, I believe, a muslim. Why do we then call this the “Islamic golden age”? 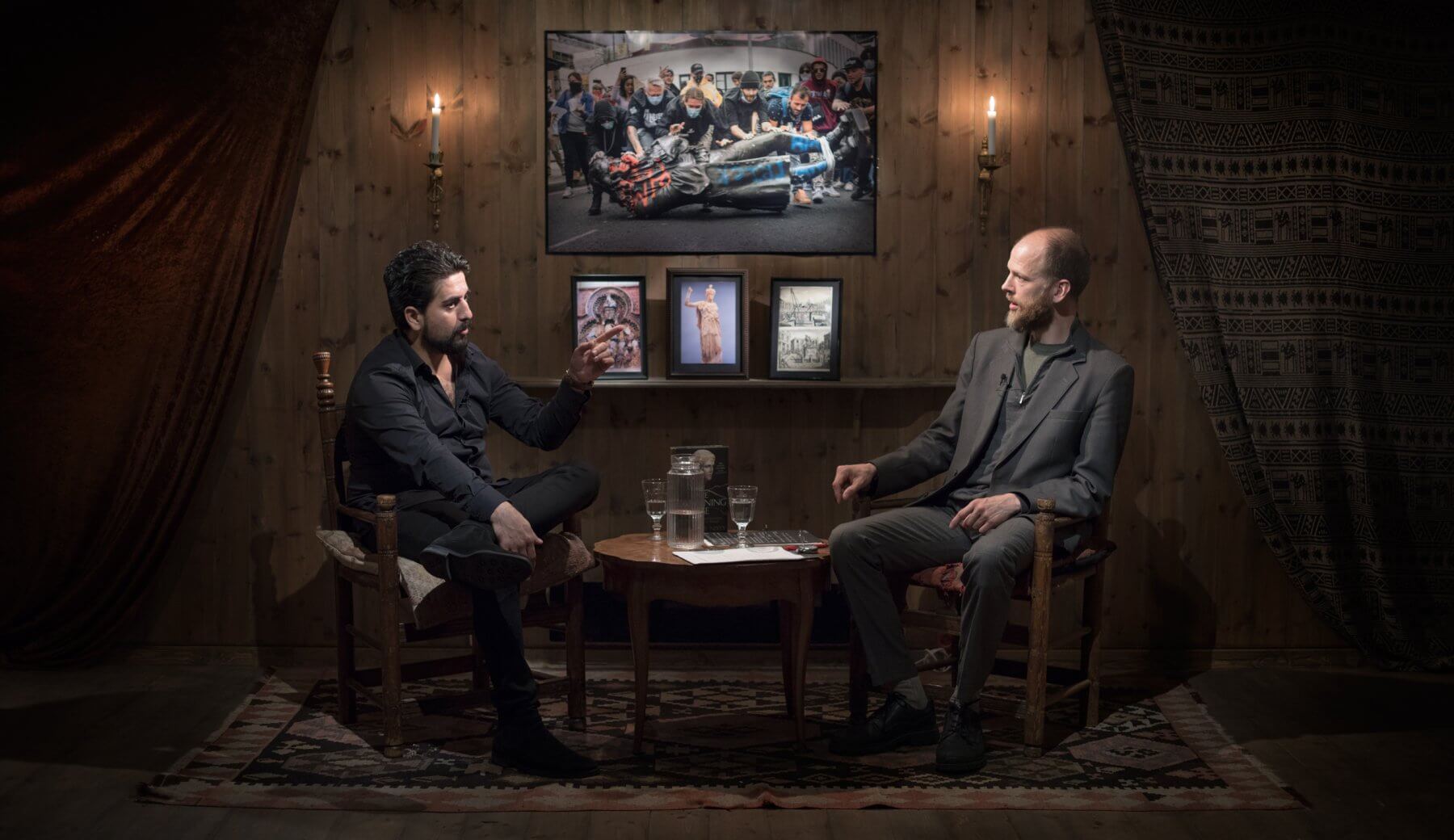 “In islam, you will burn in hell for eternity, Jan-Ove.” says Yucel, pointing to the fact that Tuv is a classical painter.

– You Will Burn In Hell

– What does the Quran say about representational images?, asks Tuv.

– First of all, iconoclasm is islamic, says Yucel, before pointing out that in Islam they do not differentiate between image-making and idolatry.

– Europe has, for at least 200 years, had an increasing picture ban, increasing ban on representational images, with the modern concept of fine art. This has also been defended philosophically. Especially with the philosopher Hegel’s idea of the spirit of time and the idea that history has a direction, that it has a will. He is more or less equating that completely with the will of God, says Tuv.

– More Censorship Is On The Way

What can we expect for the future, Tuv asks. Yucel’s outlook is rather gloomy:

– Blasphemy laws are coming back. […] When even in the West they have no courage to publish caricatures of the prophet Muhammed, how can we expect that they will allow freedom in painting, in poetry or whatever. I believe more and more sanctions and more and more censorship is on the way. It’s already happening.

– Give us a little bit of hope here, says Tuv.

– Spinoza did that, Voltaire did that. But they fought. They stood up for freedom. And this, we’re doing right now, too. We’re contributing to that. We have to stand up together and stand up against the totalitarian, intolerant ideologies. This is not only Islam, but also, as I see it, the Left.

This article was published in Norwegian at Sivilisasjonen and in english at the Herland Report.