George Frederic Watts (1817-1904), also known as "the English Michelangelo" is known for his allegorical works on love, death, hope and time which he incorporated into narrative, symbolic paintings.
Eventhough he is often labeled as a pre-raphaelite, Watts never belonged to any movement. As a young man he strived to become a composition painter in the spirit of Raphel but gave it up for carreer as a portrait painter. In the last period of his life his work stepped into a dreamworld based on myths, the bible, but also his own ideas. 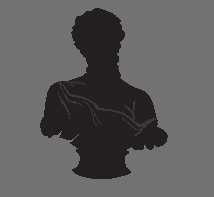