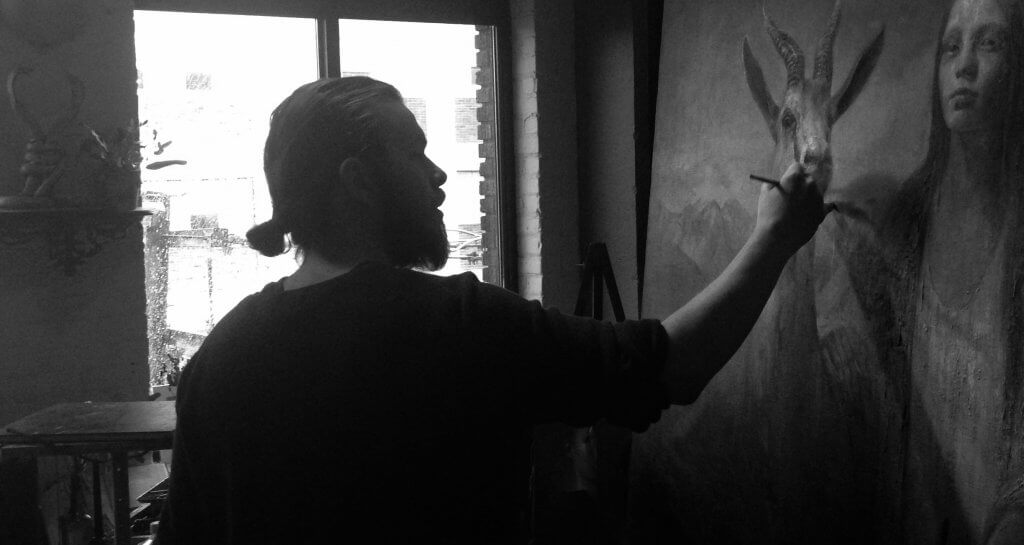 The positive element of kitsch lies in the fact that it sets free for a moment the glimmering realization that you have wasted your life.

Luke Hillestad is a classical figurative painter living in Minneapolis, Minnesota. He was introduced to the new understanding of “kitsch” by reading the book “On Kitsch” in 2007. He then studied with Odd Nerdrum in 2008. Following some years of natural skepticism towards the connotative synonym for bad taste, Hillestad studied what had been said and written on the subject and came to the conclusion that “kitsch” was the correct word to describe his profession or what he was aiming at. In 2015 he was appointed the position Selector Committee member at World Wide Kitsch, and he is now working on a book about kitsch called “Why Kitsch?.” 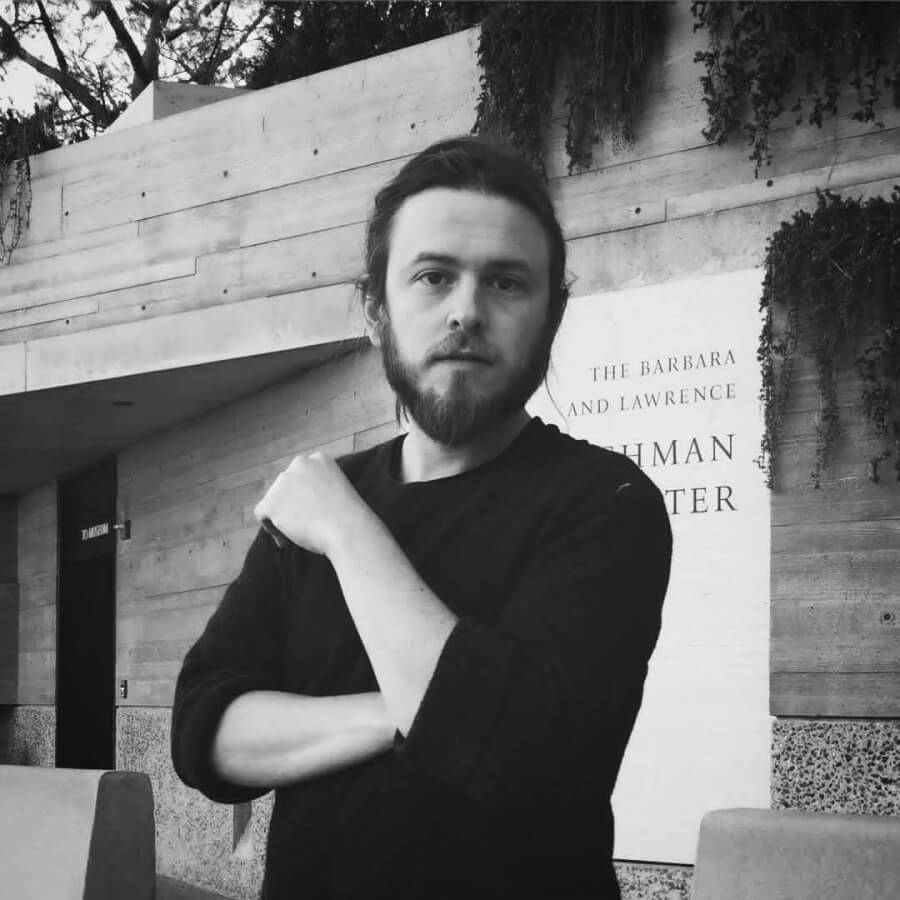 And why call it “kitsch?”

LH: When faced with kitsch some hearts melt and some cringe. The secret subtext is that Kitsch has been widely used as a coded term of abuse for certain classical values; namely the combination of sentiment, imitation, and earnestness in craft. Many of us who pursue the classical in these ways find the anti-Kitsch air to be heavy and restrictive.
In Fine Art, we are told to be ourselves unless we share too much in common with past masters. During the Renaissance, competitive imitation was the basis for quality. Some craftspeople who have been prodded by the same ancient muses, have found a home in Kitsch. When I first read about the new use of the term, I saw it as a punk-like rebellion against an Art monopoly. Then I discovered that there was much to be gained by copping to the Kitsch title regardless of the negative connotation. Rather than fighting to break into an Art system which has a well established base behind a billion dollar bulwark, kitschcrafters would do well to set up camp outside in the free air. Some of us are like nomads out here, searching for lost relics.
The gaming and film industries matured many decades after Art was established and they have largely kept spirits independent of Art. 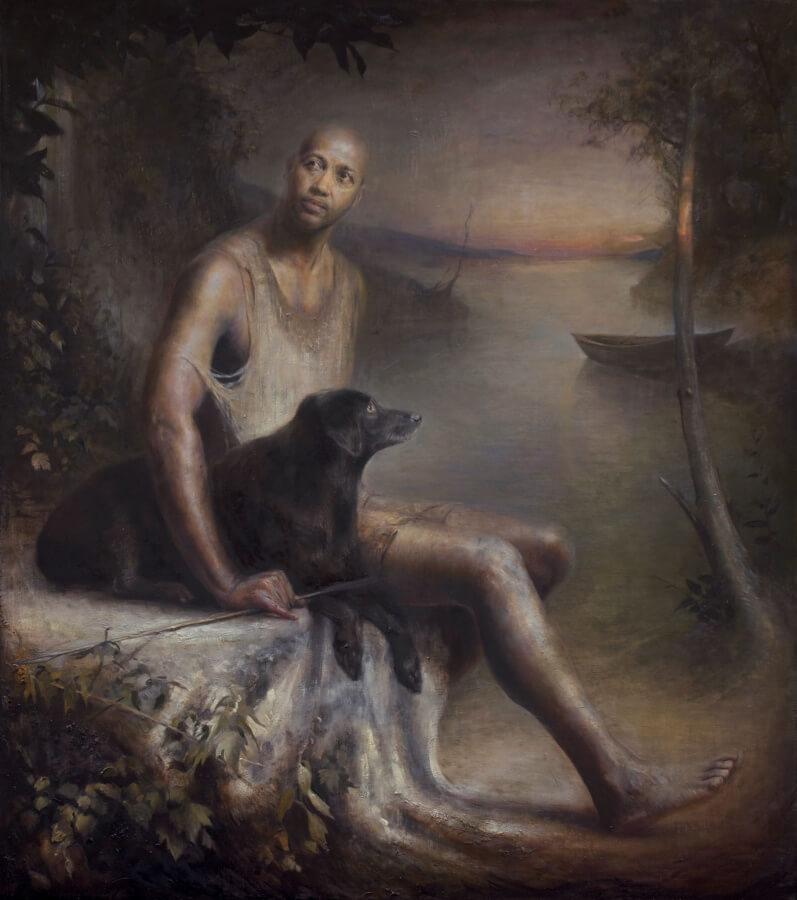 You have been criticized of copying other painters – do you see copying as a problem?

LH: If the ancient Romans had the same social anxiety and laws against copying that are present in American and European cultures today, then the world would be severely deficient of the Greco-Roman copies that we can enjoy in places like the Getty Villa. Sometimes a copy can surpass the quality of an original. For instance Theodoor van Thulden’s copy of Anthony van Dyck’s Vulcan picture turned a typical Renaissance composition into a masterpiece. Furthermore, I would rather own a perfectly painted replica of Leonardo’s “St. Anne” (as it looked before it was cleaned) than the painting which currently hangs at the Louvre. I am concerned with the presence of a work, not its provenance. Any painter who has tried to replicate a piece as wonderful as Titian’s Nymph and Shepherd knows that copying is nothing to scoff at. In fact, imitation is highly regarded within the Kitsch superstructure. In my own work, egoistic desires keep me from working on master copies all day, for I want to be known for my own compositions. Still, the keenest eye will be able to see imitation in everything I do. 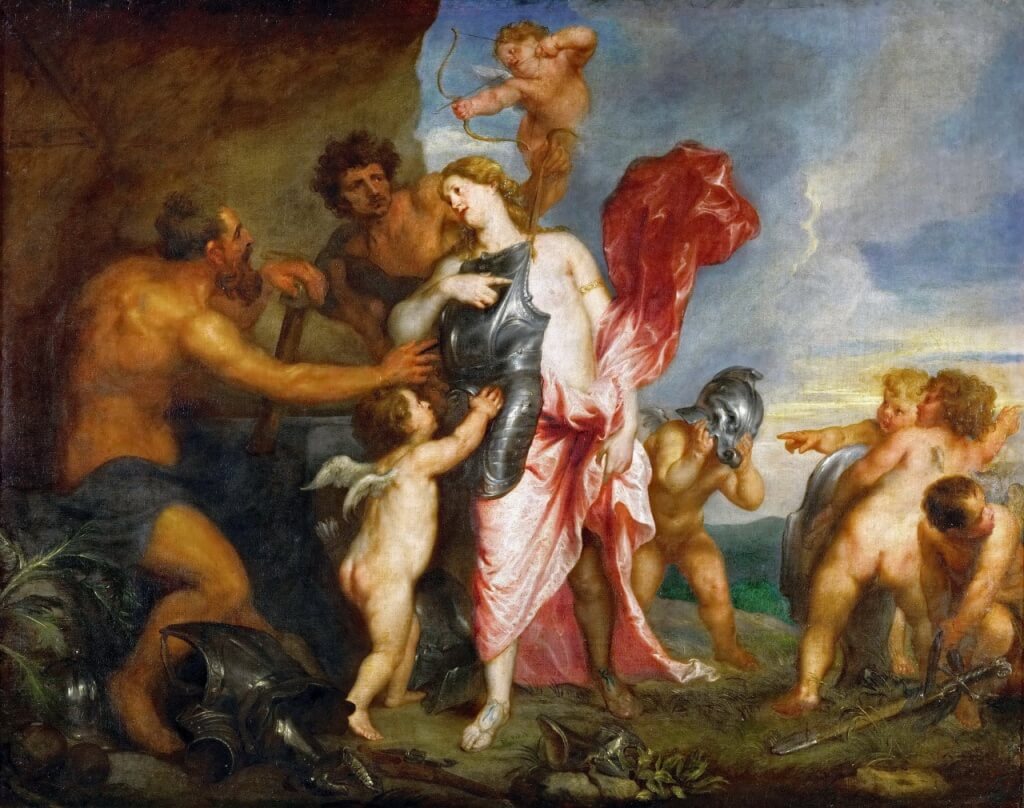 Sometimes a copy can surpass the quality of an original. 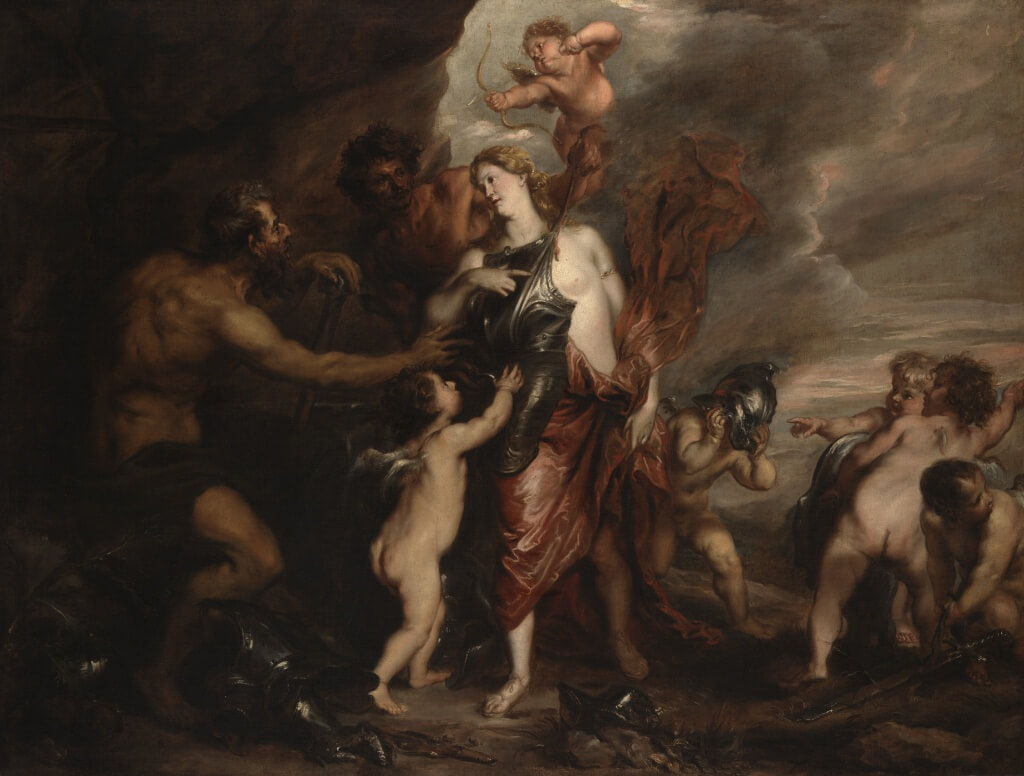 Your work resembles Odd Nerdrum but it also looks a lot like what’s currently coming out of the gaming and film industry. Why do you think the critique aimed at painting is different from that of video games and movies?

LH: There is a prevailing notion that anything entertaining must be “second-rate.” This perspective insists on a commitment to disinterested education and a holiness devoid of passions. Since the advent of the Fine Art category in the 18th century, painters have worked in a system dominated by these priorities. On the flip side there are philosophers like Diogenes who engage deep thinking with amusement. The gaming and film industries matured many decades after Art was established and they have largely kept spirits independent of Art. Perhaps the Brueghel family would have been game illustrators if they lived today. Many of my most cathartic and educational moments were engaged in movies and video games. I learned more in the opening scene to the Disney movie Up than I did during an entire University course dedicated to metaphysics. 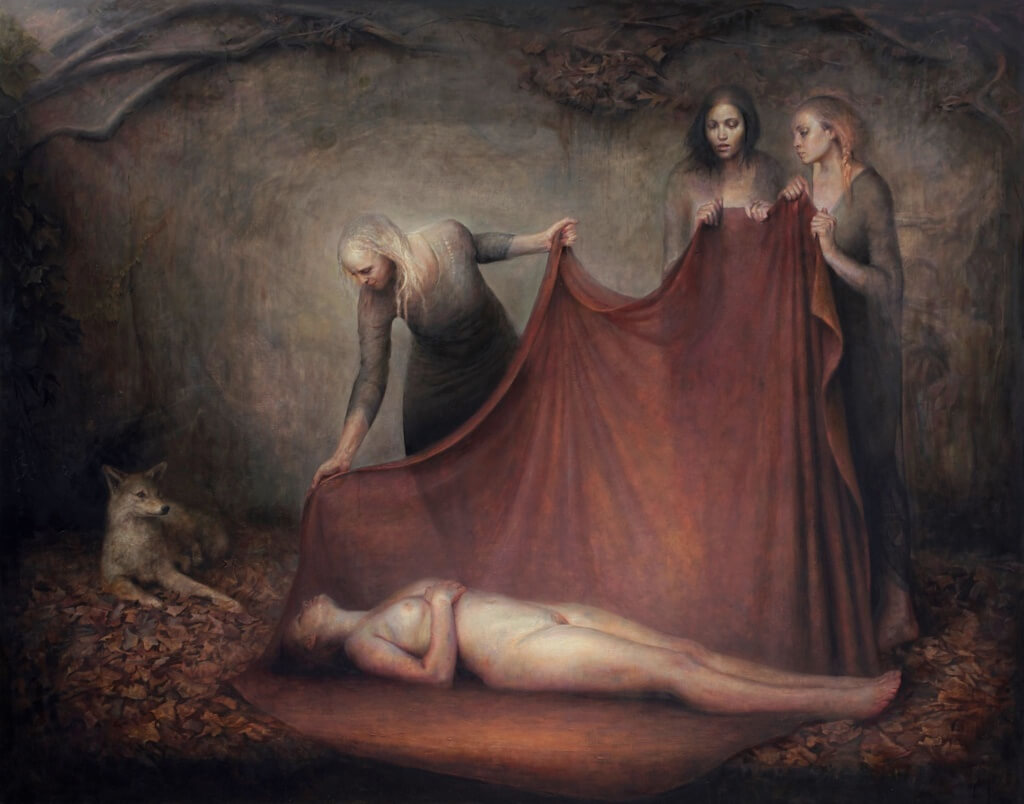 I dreamt that someone was oppressing my friends (Nerdrum and Wyeth) with a weapon. And I made the choice to help take the weapon away rather than wait for my turn to get beaten.

Surely there are many instances in these genres that are vapid, but so there are in painting and sculpture. The point here is that knowledge is best transmitted in marriage with desire. Professor and painter, Michael Pearce, put it nicely when he wrote, “Thinking about pleasure helps reveal the subtlety of the mind.” We would do well to think about the word “entertaining” as interchangeable with the word “gripping.” In this paradigm, we could talk about movies, paintings, and games as “first-rate” when they held us closely. 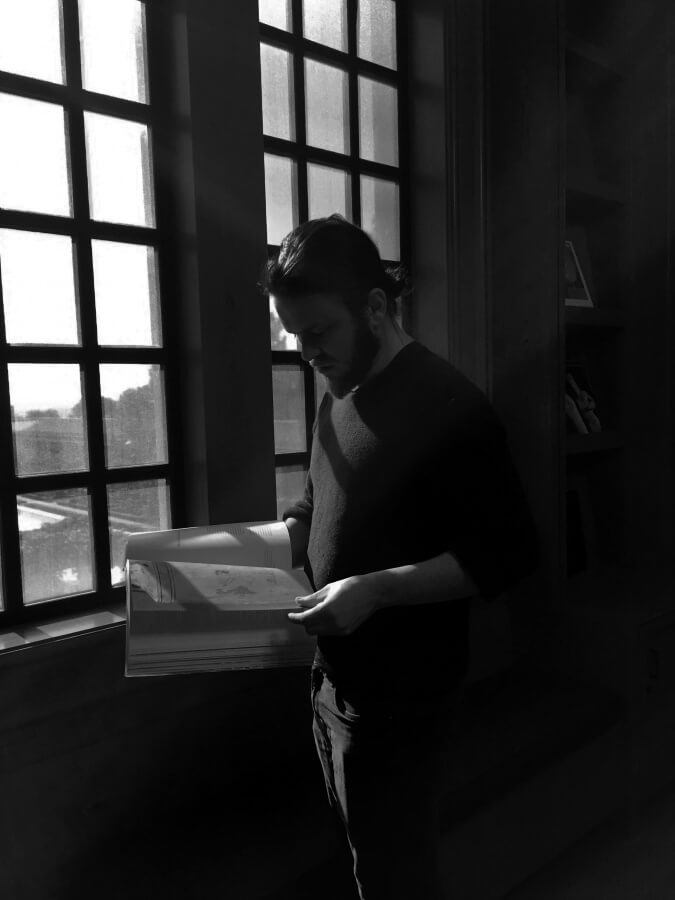 “Why Kitsch?” is the working title of Hillestad’s upcoming book.

Can you talk a little about your future book on kitsch?

LH: This project began as an attempt to organize my own thoughts on the topic. However, I quickly discovered the great extent to which Kitsch had been previously and recently discussed in academic circles. So I have endeavored to represent these intellectuals’ and critics’ thoughts systematically along with uplifting philosophy for those who find themselves working in the Kitsch realm. I expect it to be of interest to students of philosophy, as well as sculptors, composers, and painters of pathos.

But you were once skeptical to the use of the term kitsch, is not that correct?
LH: Yes, there was a time when I saw World Wide Kitsch as a talented club with a silly name. Then I learned about the characteristics and came to understand that I agree with them. I learned the extent to which painters had been beaten down with the term Kitsch. It was when I woke from a metaphoric dream that I was able to fully embrace the term. I dreamt that someone was oppressing my friends (Nerdrum and Wyeth) with a weapon. And I made the choice to help take the weapon away rather than wait for my turn to get beaten. He would try to coax it back by saying “Oh don’t worry, I won’t hit you (you’re not kitsch).”  But I share the attributes that incited the bully – I was just not big enough to provoke his wrath yet. As long as I owned the weapon, it would be rendered neutral.

LH: I am constantly listening to Arvo Pärt’s Self Portrait. I always have Simeon’s Song of Praise by Rembrandt available on my desktop to view. Also, my dream is to paint with as much heart as Michelangelo sculpted his last Pieta. Probably the greatest painting I have seen in person is The Golden Cape by Odd Nerdrum. My very favorite works make me feel as if they have always existed. They seem to have survived an extraordinary beating and all that is left is what is essential for life. 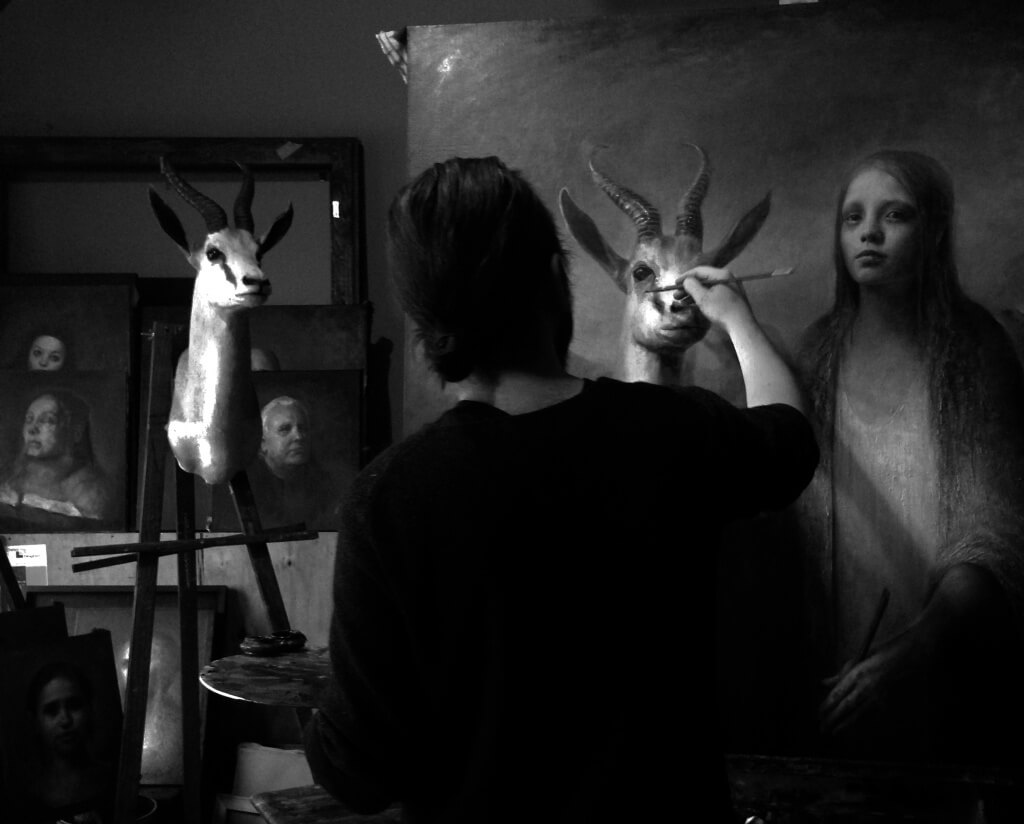 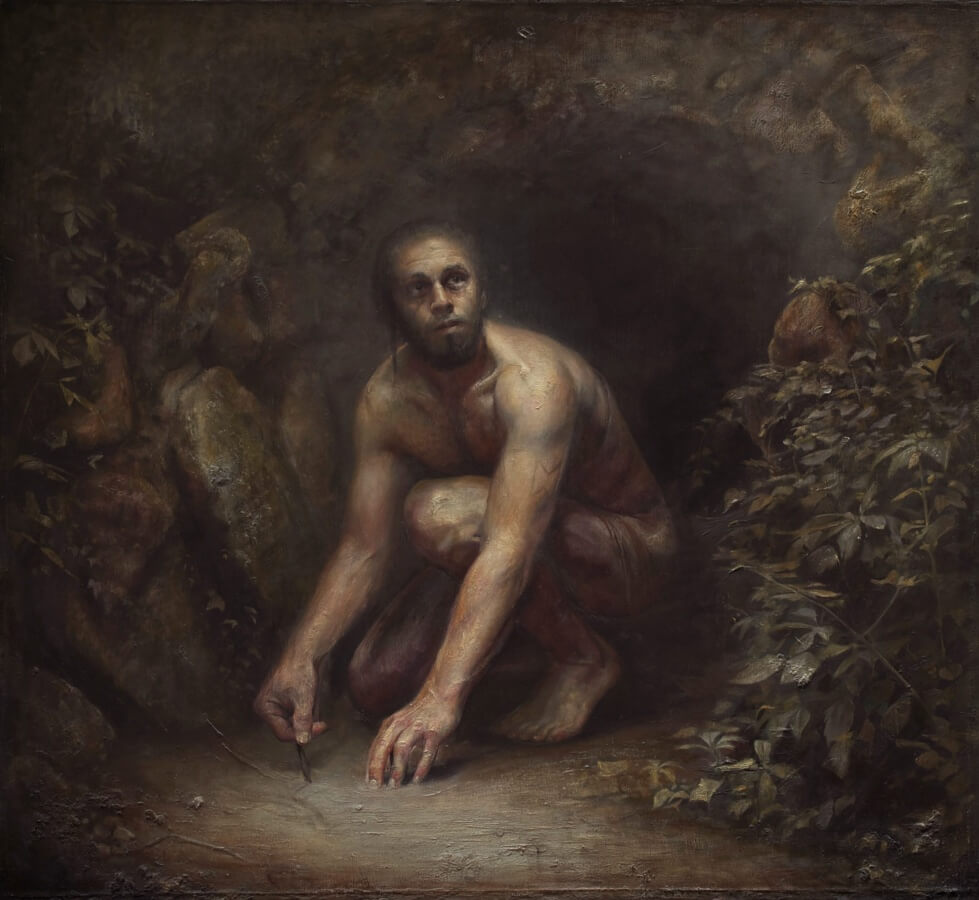 totally agree with your words. I use to be imitated by my friends in some things…but then I finally end imitating them…because they did best than me…hahahaha